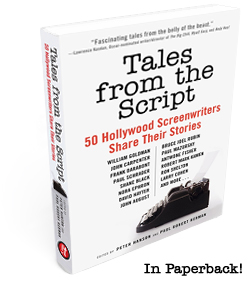 A while back, I was sent an advance copy of Tales from the Script: 50 Hollywood Screenwriters Share Their Stories and I can report that is a fantastic book that gives you the inside word from the best, most influential and most legendary screenwriters in the business. If you’re working on your first screenplay, have written 50, or you’re just a movie buff, this is an invaluable glimpse into a segment of the industry that is absolutely CRUCIAL but rarely explored in such detail.

From Mike Binder to Nora Ephron to Steven E. de Souza to John August to Paul Schrader to Mick Garris to Frank Darabont to Larry Cohen to Josh Friedman… there’s bound to be a writer in here that changed YOUR life with their words that were translated into film. So don’t just worship the actors and directors; work a little harder and learn about the scribes that the pretty people need but will never give their due credit.

I especially like the cross-section of writers and movies here; there’s a nice balance of classics and modern popcorn movies and a broad palette of filmmaking styles from the gritty populist films of the 70s up to the cgi action-fests of the 2000s.

They can’t get everyone, of course. If you’re a serious screenwriter and fan of screenwriting, there will invariably be a few screenwriters that YOU would have loved to have seen interviewed but are absent. But, even though I’m tired of hearing ol’ windbag William Goldman chatter on about the same movies he’s detailed in several books, I have to admit that he is the original “rock star” screenwriter. And talking about rock star screenwriters (an oxymoron in 99.9% of the screenwriting population, let me assure you!) it’s pretty much REQUIRED that you interview Shane Black.

It’s amazing to me that it’s been over 23 years since “Lethal Weapon” but he’s still SHANE, the legend (and this is primarily for his huge paychecks, but you don’t get that kind of money in Hollywood without having a powerful, unique voice). And having met him in person at the Austin Screenwriters’ Conference, I must say that he’s great at offering his wit and wisdom to up and coming writers. Like Black, the other writers are articulate, honest and entertaining in their stories from the trenches. The editors have gathered a fantastic group.

The only HUGE name screenwriter that’s notably absent is Joe Eszterhas, but if you want his irreverent take on things, check out his book “The Devil’s Guide to Hollywood: The Screenwriter as God!” (yes, that’s actually the title)

Buy Tales From the Script from Amazon!