“There is a lot of great advice here… Most important, as I read Calvisi’s Story Maps, I was inspired to rethink my current project. And that’s what it’s all about, right?”
-SCRIPT MAGAZINE Learn the secrets to writing a GREAT screenplay from a major Hollywood movie studio Story Analyst who will show you how to BLOW AWAY THE READER! Master the structure and principles used by 95% of commercial movies by studying detailed breakdowns, or “Story Maps,” of several recent hit movies in all different genres, including The Hangover, The Dark Knight, The Wrestler, Juno, The Social Network, Black Swan, How to Lose a Guy in 10 Days and Drag Me To Hell. It also offers lessons taken from classic films such as Sunset Boulevard, The Godfather, Gladiator and As Good As It Gets, to name just a few of the hundreds of great movies analyzed in the book.

Story Maps: How to Write a GREAT Screenplay cites examples from hundreds of hit films, several television series and includes samples from actual produced screenplays to show you HOW TO DO IT. The book provides detailed lessons on format, capturing voice and tone on the script page and developing great characters with powerful dialogue.

The book also includes exclusive insights from major industry professionals with whom the author has interacted with, including Robert Zemeckis… the screenwriters of Final Destination, Limitless, Armageddon, Antwone Fisher, Speed, Justified and Blade Runner… Elijah Wood… and the President of Production of Columbia Pictures.

You are learning from the pros by studying their work and reading their advice.

This is NOT a formula or just another structure paradigm — it is the view from behind the desk of the people evaluating your screenplay, what they want to read and what they will buy. With all the competition in the Hollywood marketplace, your script can’t just be good, it must be GREAT.

The Appendix of the E-Book includes the following Story Maps:

“Daniel Calvisi’s Story Maps is readable, insightful and exciting. It focuses on the hard work and narrative strategies the screenwriter needs to adopt to write a commercially viable screenplay, and is up to date and strategic in the clearest way. Dan’s book will help you do what you must do to succeed with your screenplay.”
-Ken Dancyger, best-selling author of Broadcast Writing, Alternative Scriptwriting, The Technique of Film and Video Editing and Writing the Short Film

“Loved it! Should be required reading in every film school.”
-Daniel Fazel, sold screenwriter and VFX Artist (Alice in Wonderland, Benjamin Button, I Robot)

“A brilliant example of what every aspiring screenwriter needs to know about the art of writing screenplays. Dan has a no-nonsense approach to screenplay analysis that cuts through the bull and delivers the goods. A must read for serious screenwriters.”
-J. Stephen Maunder, writer/director (Tiger Claws I, II, III, The Veteran, Shadows in Paradise)

“Writing a great screenplay is not easy. Dan has created a book that is straightforward and full of valuable insight and guidance for screenwriters at different experience levels. This book provides a simple way to approach your idea or rewrite for maximum results…and helpful to evaluate your work in whatever stage it’s at so you can make necessary improvements that will allow your unique story and vision to shine!”
-Laurie Lamson, co-editor Now Write! Screenwriting Story Maps: 12 Great Screenplays breaks down 12 GREAT MOVIES (NOW 13! Includes exclusive bonus map, only in PDF version, of the iconic thriller Seven, 1995) primarily from the past decade. These hit movies are fantastic examples of professional screenwriting and rock-solid structure in many different genres and budget levels aimed at varied audiences. I stand by each title as a strong example of its genre and as a primer to learn the screenwriting craft at the level that you need to be: the “submission ready” tier that makes a good script into a GREAT script.

The following films are mapped in this e-book:

Any book that gives lessons in the skill of blowing the reader away is a book writers need to read. From the Introduction to Dan’s closing, “Good luck and Happy Writing,” Story Maps delivers. Imagine sitting around a coffee shop or a bar and talking one-on-one to a movie-writing, storytelling pro like Dan Calvisi. A no-holds barred, no frills, tell-it-like-it-really-is, no sugar-coating conversation. That’s what reading this book is like.

HIGH-QUALITY PDF:
(note: An Adobe PDF file will open on any computer, Mac or Windows, as well as on most e-readers, such as the iPad and the Kindle. My PDF files feature full color graphics, super-fast bookmark navigation and print-style layouts. You can also print the book from a PDF in high resolution, if you’d like a hard copy.)

KINDLE:
(note: Kindle versions of both e-books are available for purchase at the links below. If you do not have a Kindle device, you can still read the e-books on your PC, Mac or several other mobile devices using a Free Kindle Reader App.) 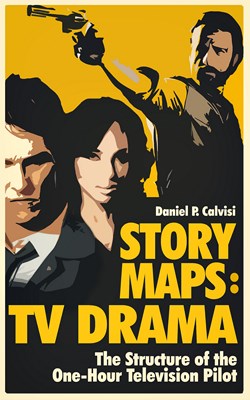 All rights reserved. No parts of these books may be reproduced in any form or by any means without permission in writing from the publisher, except for the inclusion of brief quotations in a review.