We watched The Wizard of Oz over the weekend in one of its many post-Thanksgiving television airings and I couldn’t help but think “One classic holiday movie down, several more to go!”

My list of favs includes A Christmas Story, Die Hard, Christmas Vacation, Planes, Trains and Automobiles and the granddaddy of them all…It’s a Wonderful Life, the classic film directed by Frank Capra with a screenplay by six credited writers. This reminded me of an old article of mine that was published in Script magazine way back in November 2002, so I decided to update it with some new analysis and Story Maps links… A wonderful Saturday Night Live sketch begins with the very last scene of It’s a Wonderful Life, as George Bailey and friends have their Christmas toast. But the sketch doesn’t end with the bell ringing and Clarence getting his wings — instead, a member of the crowd shouts “Let’s go kick Mr. Potter’s ass!” and the revelers charge off to find the despotic Potter. Cut to Potter’s office, and the angry mob throws him from his wheelchair and proceeds to beat the unholy crap out of the old cripple. The violence reaches an absurd level as it becomes obvious they’re beating a stuffed dummy. The dummy bit is actually unnecessary, because it’s quite a funny premise to begin with. Twisted, but very funny.

Here’s the sketch (after an ad if you can hold out):

Why does this sketch work? Because anyone who’s seen It’s a Wonderful Life a time or two can attest to the presence of a nagging little question. You know the one…

He was the villain of the story, a true “scurvy spider” of an Antagonist, but the climax does not find him getting his due — our Protagonist does not triumph over the Antagonist. Potter just disappears. Huh?

But yet the movie works. In fact, it sports one of the great film endings: “A toast to my big brother George. The richest man in town. ” Brings a tear to my eye, every time. Last Christmas season, I caught it twice on cable and it brought two more tears. So why does it work? Because it answered the Central Dramatic Question of the story:

Will restless dreamer George Bailey escape from boring Bedford Falls to a life of adventure and wealth, or will he find satisfaction in his hometown?

This question keeps popping up, as George is forced to take over the Savings & Loan, as George gets married and has children, as George gets the glamorous job offer from Potter. What about George’s dream, we continue to ask?

The ending gives us the answer: He doesn’t need that dream, because a man who has friends is truly wealthy (I can’t help but be reminded of that beautiful line from The Wizard of Oz: “Remember, a heart is not judged by how much you love, but by how much you are loved by others.” And now that I think of it: “There’s no place like home.” Wow, these old holiday classics really do share a lot!).

Alas, Potter does not need to have his ass kicked all over town, as gratifying as that may have been for us.

The most famous Central Dramatic Question in film history is probably “Who/what is Rosebud?” from Citizen Kane.

This question is raised in the very first scene of the film, and not answered until the final scene. A beautiful, perfect use of this structural device.

A good general rule is that the Central Dramatic Question should be introduced as early as possible, best when in the opening and at the latest the end of Act One (page 28-32 in the screenplay). A more complex film may contain two Central Dramatic Questions, the second one to be introduced at the Midpoint, but it is always best to keep the first one in play to maintain driving momentum until the climax. A classic example of this would be The Wizard of Oz — we always wonder “Will Dorothy get home to Kansas?” even when at the Midpoint the Great Oz tells her she must bring back the broomstick of the Wicked Witch of the East. From that point, we also want to know “How will she defeat the witch and get the broomstick?” but it’s all leading to the climax of her coming home. Thus, the true climax is really her leaving on the balloon and waking up from her dream, not the melting of the Wicked Witch — because it answers the first Central Dramatic Question. 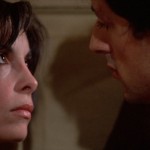 We always think of Rocky as a boxer, but his goals are to become a champion and to find love. Rocky does not accept the championship bout until the Midpoint, and the climax in which he wins the fight and Adrian answers the crucial Central Dramatic Question “Will Rocky find love and become a champion?” We ask “Will Mitch (Billy Crystal) find his smile?” which is another way of asking if he will get over his midlife crisis and find his path in life. The path he chooses to take at the end of Act One is that of an Old West-style cattle run — we wonder how he’ll survive this adventure. The climax has him risking his life in a rainstorm, roping Norman the calf like John Wayne and saving the animal from a rushing river. The very last scene definitively answers the Central Question when he points to his own grin and tells his wife “Look what I found.”

But we have to be careful the question gets answered. Let’s look at a few more unconventional examples, including one that didn’t work for me…

Perhaps the issue of the Central Question is why I found the ending of Cast Away a bit unsatisfying. For me, the question was “Will Chuck Noland (Tom Hanks) survive this ordeal?”, or perhaps if you’re judging by the opening scene which shows him lecturing about time, “Will Chuck Noland win his battle with time?” But although his love interest was an issue on my mind, I did not feel it was the driving question of the entire story; his search for love was a parallel line of action, not the main throughline.

When in the climax Chuck finally meets the mysterious woman behind the “wings” package and there is a definite romantic spark, this seemed to answer the question “Will Chuck Noland find his one true love?” and I felt a bit cheated, as the whole time thing was seemingly dropped. Maybe they intended for him returning the “wings” package to be the actual climax — but that was such an inevitable, ultimately predictable moment that it lacked dramatic power for me.

Perhaps a stronger final climax would have been Chuck’s choice of a new occupation, one that shows his triumph over his obsession with time? Retirement home activities coordinator? We can only muse.

Now, maybe you’re saying “But hey, when I watched The Sixth Sense I wasn’t asking if Bruce Willis was a ghost!” Maybe not, but weren’t you wondering “How will Malcolm come to terms with his wife?” The revelation that he is dead shows us that he can now let go of that turmoil — it is truly time for him to go, his work is done (especially because the previous scene has shown us the answer to the parallel dramatic question “Will Cole finally talk to his mother?”). Goal achieved, questions answered, fade out.

Related: VIDEO: Why the surprise ending in The Sixth Sense works

The answer to the Central Dramatic Question should be surprising. If it’s predictable, it might not work. Even if the answer is simple, the how it’s shown should be unpredictable.

Here we ask “Will Ben drink himself to death?” In the end — yep, he dies. But the surprise is that he dies while making love for the first and last time to his love Sera. We didn’t quite see that one coming. Or maybe for those of us expecting him to be saved a la Hollywood convention, it is truly a surprise when he dies. (Alternative theory: maybe the surprise is that she is actually the protagonist?)

How are all these people linked? The answer is the climax: “a rain of frogs” (duh, how else would they be linked?!).

In addition to the impossibility of predicting said rain of frogs, P.T. Anderson fakes us out in that he leads us to believe they are all linked through the TV game show, especially when we find out late in the film that Earl Partridge (Jason Robards) was the original producer of the show. At least that’s how I saw it, but I really enjoyed the film while I’ve met people who felt it was tedious. The opening of Fight Club shows us Edward Norton’s Narrator being held at gunpoint by the devilish Tyler Durden. We ask “How will Ed Norton beat Tyler Durden and survive this situation?” By the end of Act One, we’re also wondering “Will Ed Norton learn to ‘let go’ like Tyler is trying to teach him?” The climax is the answer to both of these questions — in shooting himself with the pistol Ed Norton gives us the ultimate act of letting go AND simultaneously destroys Tyler Durden (his alter-ego).

The Central Dramatic Question can be directly related to the protagonist’s external (plot) goal, but it doesn’t have to be. George Bailey does not escape Bedford Falls in the climax, but rather he comes to terms with his own place in the town. So his goal of “getting out of town” is not achieved, but we’re still satisfied because the question of “How will he solve his internal dilemma?” has been answered.

So, perhaps the Central Dramatic Question is related more to the Internal goal of the protagonist rather than the External goal? An interesting question.

As Good as it Gets Story Map

Harry Potter and the Deadly Cash Grab?Google, Netflix, Comcast and a script-sharing grandma
Scroll to top